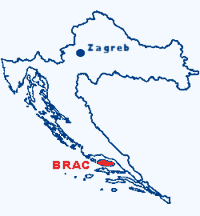 The island of Brac is the third largest island of Croatia. Mountainous in aspect it is nearly 36 km long and 12 km wide. Its precipitous southern coastline rises up to 778m above the sea level at Vidova gora, the highest peak of all the Croatian islands.

Composed primarily of limestone and dolomite, the quarries of the island of Brac have been a source of stone for building decorative stonework for centuries. The old Romans have known its quality and used this very stone to build cities, amphitheaters, temples, palaces and graves all over Dalmatia.

Supetar and Bol are the main tourist resorts of the island of Brac. Supetar at the north coast has the largest port for the ferries. Bol located on the south coast of the island is well known for the most attractive beach on the Adriatic coast: Zlatni rat (the golden horn  400m long pebble peninsula stretching into the sea).

There is also an island airport 25km from Supetar with several weekly flights from Zagreb and the main European towns in the summer. There are regular bus connections between all the villages of the island. Car ferries operate several times daily from Supetar and Sumartin with the mainland. You can also get to know the island by renting a boat or a car and enjoy the ride along the scenic roads.